On 24.9.2011 in the village of Katunica a young 18 years old boy was run over with a bus by a group of gangsters. They belonged to the criminal organization of Kiril Rashkov a.k.a King Kiro. Immediately people of the village gathered in a protest, they attacked some of the cars (including luxury cars) of the so called "king". There were some information that people found in one of the cars documents from police that allow to King Kiro to move everywhere without being stopped. Another boy (16 years old) died on the protest because he had weak heart. Police try to defend the property of the criminal boss. Soon a lot of football hooligans and fascists from Plovdiv arrived in Katunica. Some of the luxury houses of King Kiro was burned. Police helped King Kiro and his people to flee.

Why fascist scum joined so fast? Because King Kiro has gypsy origin. In the next day there were anti-gypsy demonstrations in some bulgarian towns. Some politicians and all the fascist scum tried to present the incident like a racial conflict. In some cities gypsy's communities were attacked.

But the anti-fascist mood is still strong in Bulgaria. You can see in the video bellow that gypsies in the ghetto Stolipinovo in Plovdiv have armed themselves and are ready to defend against nazi scum. One gypsy man from the video said that:

"Till yesterday we lived like brothers - bulgarians, gypsies, turkish people. Now they want to attack us but we will defend ourselves".

In Sofia a group of anarchists and anti-fascist activists organized almost immediately after the incident. They distributed some leaflets on the streets of Sofia and talked with people explaining that this is social conflict not racial! Rich gangsters (protected by police) against ordinary people. Not gypsies against bulgarians. A lot of ordinary bulgarians agree with them. 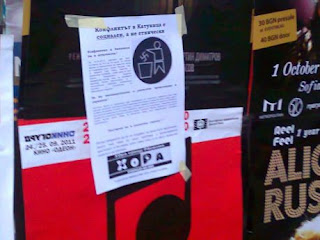 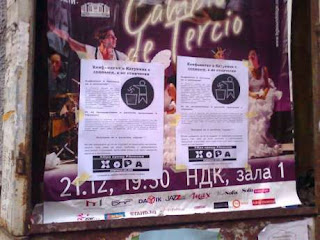 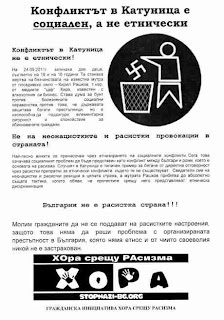 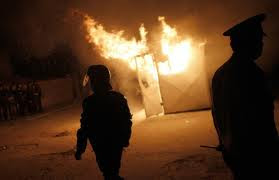 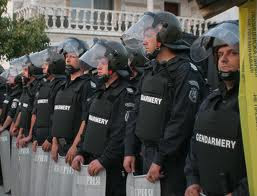 In the same video people of Katunica said that they are not against gypsies, they are only against King Kiro and warned politicians not to turn it into racial war. People also said that other gypsies in the village (not part of the King Kiro criminal organization) came to support them in their sorrow and people are grateful for that.

Situation still remains critical. Is it the start of an ethnical conflict or the start of a social war against the state that protects rich criminals?