About activism in Bulgaria - May 2010 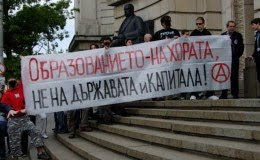 We received an e-mail asking about the situation in Bulgaria. So we will use a recent protest as an example for it.

First Bulgaria is not Greece although they are neighbours. It is sad to say but no matter how hard situation is most people in Bulgaria do not take to the streets. There are different explanations about this. Some claim the bolshevik regime is to blame. Bolsheviks ruled Bulgaria between 1944 and 1989 and they rule it with iron fist. A lot of older bulgarians still remember it and are afraid to protest. Young people are not afraid as most of them were still not born in that time but they are brainwashed by capitalist propaganda. A lot of young people believe that all left movements are bad and hypocritical like bolsheviks and the only solution is market economy and western-type of "democracy". Also most of nowadays politicians, policemen and businessmen are the same that ruled before 1989 and they surely know how to break any dangerous social movement from the inside.

The global economic crisis hit Bulgaria almost as hard as Greece. The government started to cut social fundings, fundings for health care and education. They announced that they are going to cut fundings for Bulgarian Academy of Science and University of Sofia with 25%. So a protest against this was organized on 11 May 2010. Some hundreds people gathered in front of the University. A small group of anarchist students were also present with their own banner. But organizers of the protest send university guards tried to push them out of the protest. And who were the organizers ? They were persons close to the government, the university administration and official student organizations. This is not the first cut for the education - before some months government reduced education budget. No one from the organizers protested then. But we have already seen this trick. Government tell them to protest now so the government may say something like this "Ok, we will not cut 25% of the money, we will cut only 10%". And the "organizers" will declare victory - "We prevent the big cut of 25%, they will only cut 10%". That is why they hate anarchists and everyone who can think independently - because we can see their dirty tricks.

It is not a big deal that the fuckers tried to push anarchists out of the protest (they actually failed). Much more big treat is the behaviour of some other activists. Most of the student organizations are "official", they are approved by the power. There are only one informal grass-root organization. It is small and there are a lot of young communists in it but still it is an anternative. But after the protest of 11 may they blamed anarchists too. They said "this is not the right way anarchists should protest" (sic). Why do they act like this ? Maybe they are so ideologically blind that they believe a big protest with brainwashed people is better than a small protest with independently thinking people. Or...they are used by someone else ? As we say cops and politicians know very well how to break any social movement from inside.

It seems for now that the only things that the power cannot cope with are small individual acts of rage against the system. That is why stealing from work, vandalizing buildings, small sabotages and "madman acts" are so popular in Bulgaria. If you act alone or with some trusted friends there are no one who can betray you. At that moment in Bulgaria this is the only form of resistance that matters.